Background :The Pfizer, Inc facility in Lincoln, NE includes an 8-acre lake. This lake has had a history
of increasing eutrophication, as pond odors (sulphide) and excess algae blooms have become increasingly
problematic in recent years.Johnson Controls is under contract with Pfizer to provide process control and maintenance services a this site, and is responsible for upkeep on this 8 acre lake. In the last several years, the site manager, Mr. Steve  Amos, has utilized a variety of algae control methods, such as copper sulphate and herbicides. Despite these efforts, the lake condition has continued to deteriorate. By late April 2012, particularly with an unusually warm spring and abundant sunshine, the lake was highly odorous, and was 30 to 50% covered with algae. Because past chemical and physical treatments proved ineffective, Johnson Controls / Pfizer elected to use the Bio Lake Clear and Ecosock System, distributed by Organic Earth Solutions LLC in New Jersey.

ComboPacks. ComboPacks include a liquid bacterial concentrate (Bio Lake Clear) plus a slow release powdered bacteria / nutrient mix (Bio Lake EcoSocks).  is ultra-concentrated, with a mix of nitrifying and denitrifying bacteria that out-compete algae for N and P nutrients. EcoSocks consist of freeze-dried, sludge-reducing bacteria and food grade nutrients encased in a biodegradable sock. When placed into water, the EcoSock continuously produces sludge-digesting, algae-fighting bacteria for a full one month. After one month, the EcoSock is removed, discarded as yard waste, and replaced with a fresh Bio Lake EcoSock. Together, Bio Lake Clear plus EcoSocks make up the ComboPack. ComboPacks are designed for once a month application. 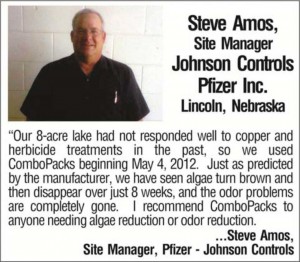 ComboPack Dosing. A total of 14 ComboPacks were applied per dose, with one ComboPack dosed at each of the 14 white dots on these dates: May 4, May 18, June 26, and July 10. Results. A photo chronology from before treatment through dramatic algae reduction is presented on the next page. As predicted by the manufacturer the sulphide odors were eliminated within 2 to 3 weeks of first application. Within 2 weeks (from May 4 to May 18), the previously “healthy” green algae had begun to turn brown (as predicted). By 6 weeks, most of the algae had died, and surface algae coverage was
reduced from 30 to 50% down to 5 to 10%. By July 10, about 8 weeks after the first application, nearly all
excess algae was eliminated, the water clarity was superb, and odors were completely gone. 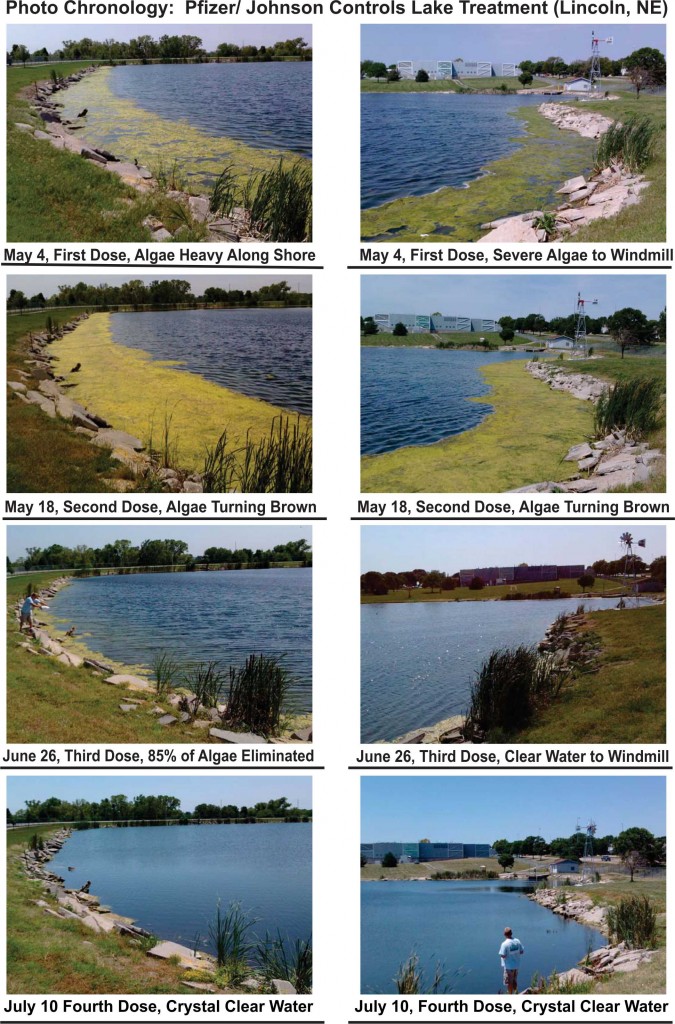 I’m home owner who lives directly on Glen Lake. I complained about the quality of the lake to the mayor, H W. Elton, and the lake association. Living on the lake and not being able to fish or canoe makes for a not so much fun summer.  I have young kids and we all enjoy… END_OF_DOCUMENT_TOKEN_TO_BE_REPLACED